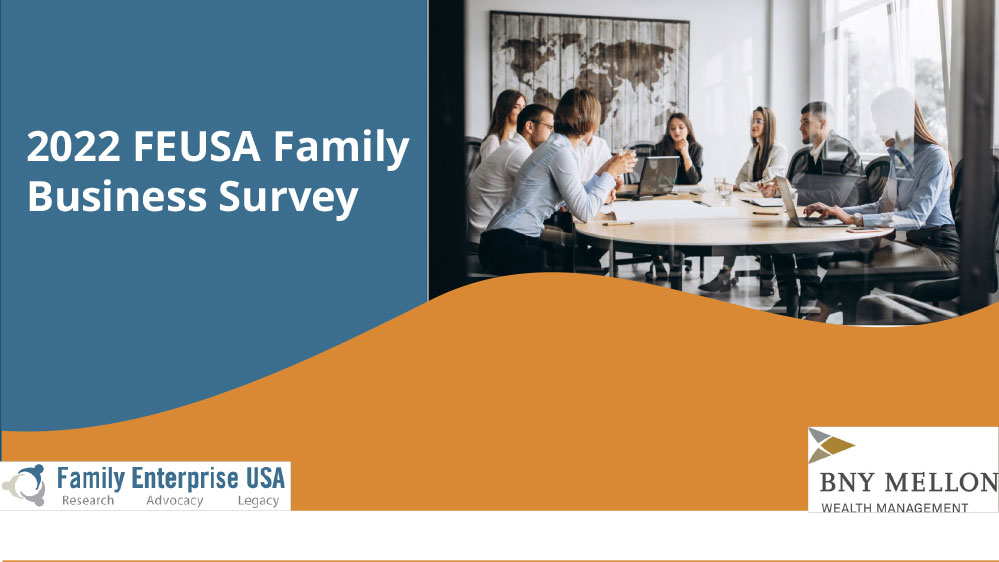 Despite inflation, pandemics, and tax worries, 88.5 percent of America’s family businesses expect revenues to increase in 2022, according to the Family Enterprise USA 2022 Annual Survey conducted in the first two months of 2022.

The survey, responded to by 300 family businesses, showed an upbeat vibrancy in the face of pandemics, new government regulations, and tax threats. The survey covered a cross section of America’s family-owned industries that contribute $7.7 trillion annually to the U.S. gross domestic product. Family businesses account for 83.3 million jobs, or 59 percent of the country’s private workforce.

The survey respondents of the FEUSA 2022 Annual Family Business Survey consisted of 23.7 percent in manufacturing, 10.4 percent in construction/facilities, and 9.75 percent in real estate, according to the research sponsored by BNY Mellon Wealth Management. Only five percent of family businesses today are in agriculture, according to the survey.

Last year, some 36 percent of the family businesses operated in 11 or more states and on average paid their employees more than non-family businesses and nearly 90 percent kept their staffs employed over the last pandemic-challenged year, the findings showed.

In 2022 and 2023, the greatest impediments to family businesses growth are expected to be recruiting and retaining people, according to the research. Over 34 percent in the study cited talent and labor worries as their number one concern, with market conditions (25 percent), and onerous government regulations (13 percent) as the next greatest impediments to growth.

Looming inflation worries also ranked high, with over 11 percent of family business owners/managers stating this as a top business risk.

“There is nothing more important than cutting back impediments to family business growth as inflation continues to increase their costs,” said Pat Soldano, president of Family Enterprise USA and the Policy Taxation Group, non-partisan organizations advocating for family enterprises of all sizes.

When it comes to passing down the family business (58 percent are S-Corporations) to the next generation of family operators, a large percentage, 79 percent, say the business “is part of the children’s legacy” and 85 percent say it is important to keep the business all in the family to “create and sustain jobs.”  Yet, the study revealed, only 51 percent have passed on ownership and only 35 percent have passed on controlling or full ownership.

“With proposed changes in estate tax legislation, it is more important than ever for families to do their planning to pass ownership to the next generations to sustain the business and maintain the legacy,” said Soldano.

The survey also revealed that 76 percent of charitable giving by family businesses is done locally.

“If the family has to sell the business to pay the estate tax, the employees lose their jobs, the family loses their livelihood, and the community loses the charitable giving from the business,” Soldano added.

One of the key issues raised in the study was the threat of additional taxes hurting family businesses, with 45 percent of family businesses saying new income taxes ranked as their biggest tax worry. Estate taxes, commonly known as The Death Tax, was the second biggest tax headache with 27 percent of respondents citing it as a top ranked concern, the survey showed.

Some 31 percent of respondents in the study said repealing the estate tax entirely was the most important tax issue, but other issues, such as reducing the federal deficit (21.9 percent), and reducing government regulations (17.3 percent) also ranked high, according to the research.

The findings also showed family businesses, of which 47.5 percent expect to gain revenues over $20 million in 2022, see the greatest growth coming from the strategic choices they made (35 percent), while over 24 percent said improved revenues will be due to improving post-pandemic economic conditions.

“Family are resilient and can adapt as they did during the pandemic,” the Family Enterprise USA chief said. “They do this because they plan their businesses for the long term and as a legacy for the family, the employees, and the community.”

For the full details of the new “FEUSA 2022 Annual Family Business Survey”.